All is not well inside country’s primary opposition party too 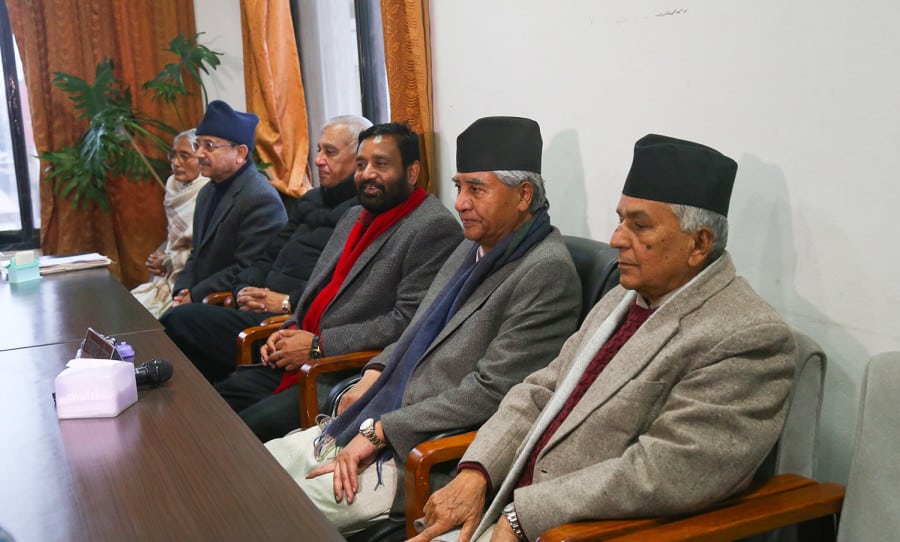 At a time when the ruling communist party is in a deep crisis, internal discord and dispute also plagues the primary opposition, Nepali Congress. The party, already grappling with feuds between various factions, is now witnessing a new wave of discord with senior leader Ramchandra Poudel submitting a 16-point memorandum to President Sher Bahadur Deuba, […]

At a time when the ruling communist party is in a deep crisis, internal discord and dispute also plagues the primary opposition, Nepali Congress.

The party, already grappling with feuds between various factions, is now witnessing a new wave of discord with senior leader Ramchandra Poudel submitting a 16-point memorandum to President Sher Bahadur Deuba, and the establishment expressing unwillingness to budge on some of issues raised in the document.

“We are not happy with the way the establishment faction responded to our demands,” central working member, Arjun Nar Singh KC, also a member of the Poudel faction that has demanded the memorandum be discussed in the central working committee of the party on November 6.

In the memorandum, the Poudel group has raised issues related to the “unfair” distribution of the party’s active membership, recruitment of people who joined the party recently, formation of various departments of the party, and the general convention of the party.

The Poudel camp alleges that the Deuba faction distributed active membership only to its allies so that only representatives loyal to the establishment are elected during the general convention. It also says that Deuba, who has been president for four years, decided to form various 20 departments of the party only at the fag end of his tenure to influence the outcome of the upcoming general convention.

The party has convened a meeting of party office bearers, former office bearers and central working members available in Kathmandu on Monday. The party is planning to convene its central working committee meeting on November 6 in order to resolve the differences inside the party and possibly reschedule the 14th general convention.

“I am ready to reconsider all of my decisions, except on the formation of the party departments,” Deuba was quoted by Gagan Thapa, another central working committee member, during a recent meeting.

The party recently decided to increase the number of active members from 450,000 900,000 ahead of the general convention, scheduled for February next year. Active members are primary voters who pick representatives at ward level.

Defending the decision of distribution of active membership, Nidhi who belongs to Deuba camp, said that everything was being done as per the decision of the central working committee.

But Nidhi’s claim was challenged by another central working committee member, Mahesh Acharya. Acharya said active membership should be distributed as per the requirements of the local committees.

The Poudel faction is not satisfied with the response it received for its 16-point memorandum, party insiders told the Post. The faction wants the establishment to commit to holding the party general convention in February, as was decided earlier. It believes that Deuba wants to postpone the general convention to prolong his stay at the helm of the party.

The Poudel faction’s hopes of getting the establishment to commit to a February convention was further dented when former general secretary and senior leader Krishna Prasad Sitaula proposed that the 14th general convention of the party be postponed.

Situala said that as it was impossible to conduct the general convention in February, the party should reschedule it to May or June, said another central working committee member Minendra Rijal

Arjun Nar Singh KC, meanwhile, said that the rival camp was not serious about resolving various issues that have cropped up in the party. “Democracy is in trouble and we are being dragged into a cold war between major powers. It is only our party that can play a balancing act between India and China,” KC said, “But our leaders are not serious about it.”