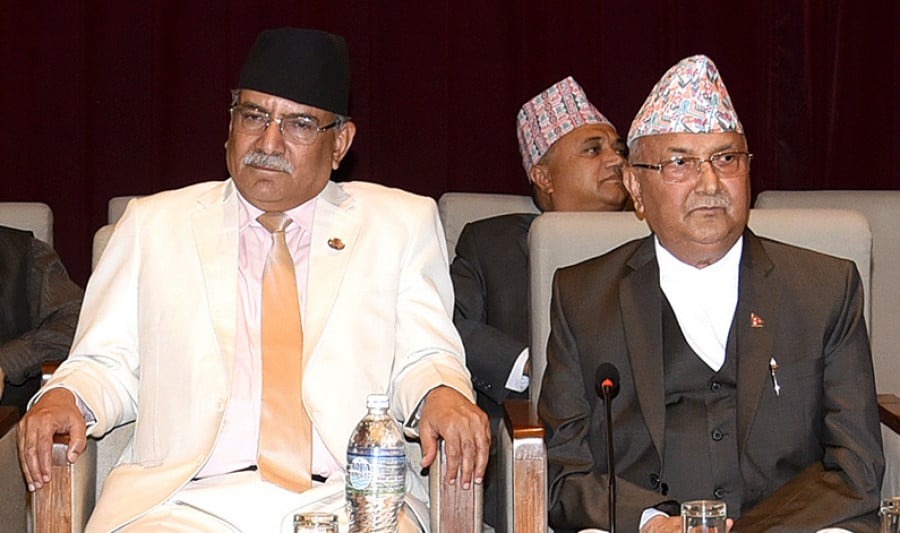 The ongoing conflict between the two chairs of the Nepal Communist Party–KP Sharma Oli and Pushpa Kamal Dahal–is deepening by the day. A day after Oli sent his confidantes as emissaries to Dahal’s residence, the Dahal faction, comprising senior leaders Madhav Kumar Nepal, Jhala Nath Khanal, Bamdev Gautam and Narayan Kaji Shrestha, on Tuesday once again proposed that Oli call a Secretariat meeting.

Earlier on Saturday, the Dahal faction had also submitted a letter to Oli, requesting him to call the Secretariat meeting. Oli has maintained but one stance—that any party committee meeting would be held on an as-needed basis and for that to happen, there must be an agreement between the two chairmen first.

Since Friday, the Dahal faction has held the Secretariat’s “informal” meeting thrice.

While Oli is using all his resources to counter the rival faction, Dahal and his allies too are standing firm this time around, according to insiders.

The nine-member Secretariat is currently vertically divided, with Dahal controlling the majority. Oli has the support of Bishnu Poudel and Ishwar Pokhrel. Ram Bahadur Thapa, Dahal’s close ally during the Maoist war, however, has refused to attend the “informal” meeting of the Secretariat that Dahal has been holding.

Many believe Thapa could side with Dahal, giving the latter an edge.

A leader said Oli’s refusal to hold the Secretariat meeting is aimed at tiring the Dahal faction out, as despite not having the majority in the party, he considers himself the senior chairman. Oli is the prime minister also, so he has that luxury of not abiding by what the opponent faction says, according to the leader.

The Dahal faction’s repeated requests to Oli to call the party meeting have also led some to question why Dahal is not employing his “executive” authority as “executive chair” of the party. Many wonder if Dahal indeed holds the executive authority to call a party meeting.

Shrestha on Tuesday attempted to make light of such concerns, saying their proposal to Oli to call a Secretariat meeting should not be misconstrued as their weakness, as they are trying to hold a meeting on the basis of consensus.

“We are sensitive about the situation the party has reached,” Shrestha told reporters after the ‘informal’ meeting of the party Secretariat held at Dhumbarahi on Tuesday evening. “We are for saving the party unity and we have requested the chair [Oli] for a meeting, on the basis of consensus, on Thursday.”

Insiders say the Dahal-Nepal faction is planning to call the party Secretariat meeting even if Oli refuses, but such a move could lead the party towards a split.

Oli has already scuttled the Dahal-Nepal faction’s plan of holding a meeting on Wednesday, as he is flying to Kimathanka in Sankhuwasabha.

The infighting in the ruling party now has become a battle of the egos, insiders say.

Oli on Tuesday morning sent Shankar Pokhrel, chief minister of Lumbini Province who is also a Standing Committee member, to Khumaltar to hold talks with Dahal.

According to sources at Dahal’s Secretariat, Pokhrel conveyed the message that Oli is ready to implement party decisions. Dahal, however, wants all outstanding issues to be sorted through party meetings rather than one-on-one meetings between the two chairs, the sources said.

After receiving the written proposal for the party meeting from the Dahal faction, Oli is learnt to have asked Poudel, the party general secretary, to make preparations for a meeting “as per the provisions of the party statute”.

Oli’s such diktat has irked Dahal no end, as instead of responding to the written request for the meeting, Oli is passing his own orders.

“As the executive chair, I have the authority to call the meeting. The majority of Secretariat members had given a written letter to Oli seeking his nod to the meeting as a goodwill gesture as we do not want the conflict to escalate,” a Standing Committee member quoted Dahal as telling Poudel on Monday.

Oli had sent Poudel to Dahal’s residence on Monday.

Oli’s rigid stance has now made even some leaders close to him wonder why he is making a simple issue like calling a meeting an issue of prestige, according to some leaders. Oli knows that he cannot escape a party meeting and he is just trying to delay it as much as possible, they say.

“During informal meetings, even leaders, including lawmakers, close to Oli have started to express concern over his obstinate refusal to hold party meetings,” said a Standing Committee member close to Nepal. “Sooner or later, Oli will agree to party meetings; he has no other option.”

Oli so far has some cards up his sleeve to threaten the opponent faction—like issuing an ordinance to change the law for a party split and dissolving the House. Though House dissolution is not allowed by the constitution, many say Oli may go to that extent too if he feels extremely cornered.

“I don’t think Oli is going to display flexibility. He is just biding his time,” said Matrika Yadav, a Standing Committee member close to Dahal. “He has already sent a message to Dahal that the meeting would be held only after two weeks.”