9 people eliminated, 34 others hurt in bus accident in Baitadi 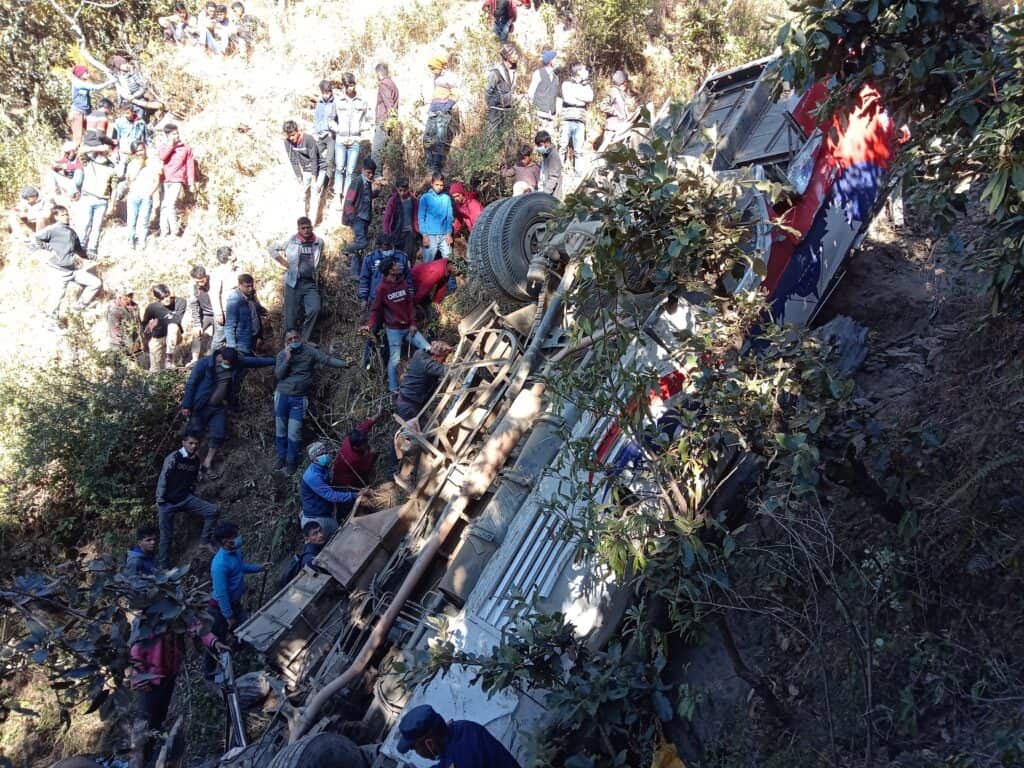 Tripti Shahi, Mohan Budhaair & DR Pant Published at: November 13, 2020 Updated at: November 14, 2020 08: 00 Darchula/ Baitadi 9 individuals were eliminated and 34 others were hurt in a bus mishap in Baitadi district on Thursday night. The bus en route to Mahendranagar with 43 travelers onboard fell almost 600 metres down […]

9 individuals were eliminated and 34 others were hurt in a bus mishap in Baitadi district on Thursday night.

The bus en route to Mahendranagar with 43 travelers onboard fell almost 600 metres down the roadway at Khodpe in Patan Town, authorities stated.

A police group led by DSP Narayan Prasad Adhikari had reached the spot right after the mishap. The hurt guests were rescued by residents and the security personnel on the very same night.

Birendra Karki, the bus driver, who was receiving treatment at Maya Hospital in Dhangadhi, stated the accident took place after the guiding wheel jammed at a narrow roadway bend.

” I could not turn the steering wheel towards the left and the bus overturned,” he stated.

Some survivors, nevertheless, stated that Karki knew the difficulty with the bus since he had stopped the automobile from time to time to look for the issue.

” The chauffeur stopped and examined the lorry for a minimum of 3 times. We could inform something was wrong. We had actually even recommended him to fix the problem initially prior to advancing with the journey, but he did not listen to us,” said Harka Bahadur Dhami, one of the travelers confessed at Dadeldhura Health center.

Another survivor Ritesh Bhatta of Khochale in Baitadi stated, “I had actually requested the chauffeur to stop the lorry but he insisted on continuing saying the bus was experiencing only minor problems. He told us not to panic.”

The cops are examining the reason for the mishap, stated DSP Adhikari.

” Our examination is still in development. It might be human mistake or a mechanical glitch.”

Bimala Kunwar Aidi of Dogadakedar lost her hubby in the accident.

” My partner, our one and a half years of ages child and I began the journey from Saleni to my maternal house in Kanchanpur. It was nearly 10 pm. On the way, the bus lost control. I was knocked unconscious. When I pertained to my senses, my kid was weeping nearby. I grabbed him and looked for my other half. But, he was not there.”

Aidi and her infant are getting treatment at Maya Metro Medical Facility in Dhangadhi.

Tripti Shahi is the Baitadi correspondent for Kantipur Publications.

Mohan Budhaair is the Dadheldhura correspondent for Kantipur Media Group.

Dr Pant is the Dadeldhura correspondent for Kantipur Publications.